I have just decided to finally publicly share a project that I have been working on for a while, and I thought this would be the best place to start sharing it. 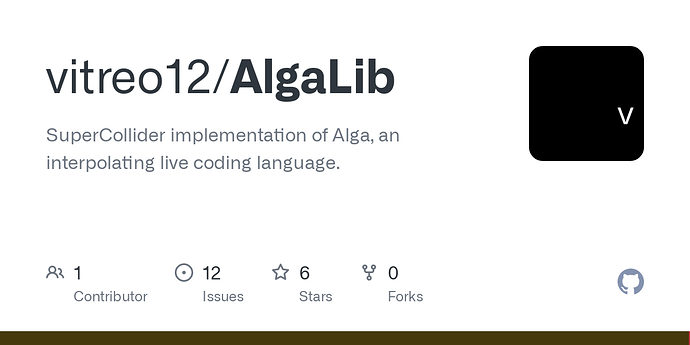 Alga is a new language for live coding that focuses on the creation and connection of sonic modules. Unlike other audio software environments, the act of connecting Alga modules together is viewed as an essential component of music composing and improvising, and not just as a mean towards static audio patches. In Alga , the definition of a new connection between the output of a module and the input of another does not happen instantaneously, but it triggers a process of parameter interpolation over a specified window of time.

As of now, Alga only exists in the form of AlgaLib, an extension for the SuperCollider environment. While AlgaLib contains all the core features of Alga, I also plan to build a custom syntax on top of the audio implementation (similarly to what TidalCycles does with SuperDirt).

To install AlgaLib, you can either:

Check the Help files and the Examples folder for usage and examples. There also are a couple of examples in the Examples/Extras folder using FluidPitch and FluidLoudness to generate feedback sounds between two sine oscillators.

Let me know what you think and if you have any questions!

Have a great day

This is so cool! I know the famous FluCoMa Arch Linux community will be into this. Now objects compile maybe they can make some fancy sound processors to share