It seems like fluid.plotter is sending x y coordinates on both mouse down and mouse up events. Is there a way of reporting the coordinates only on mouse down? I don’t want a sound triggered when I release the mouse from the plotter.

I looked into the jsui file but couldn’t figure it out.

I’ve managed to filter the mousedown event using [mousestate], but was curious whether it could be done in a more clever way… 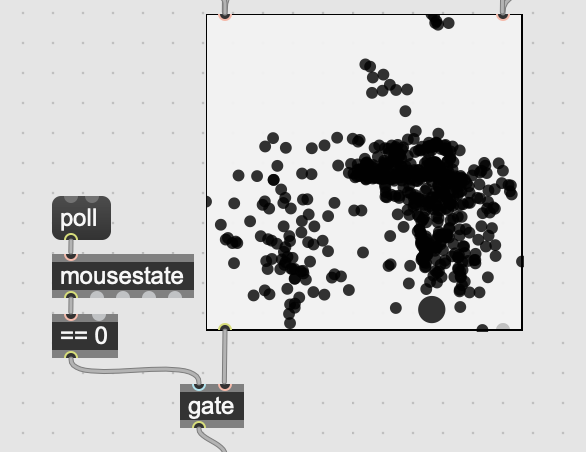 This is how I envisaged one might make a more custom set of behaviours when I was thinking about the interface initially. It stops the fluid.plotter becoming too bloated with parameters and attributs to manage which are all hidden inside the object. As well, we try to keep the SC and PD versions with feature parity and how you deal with the callback of coordinates is something that is very CCE specific.

I hope the solution is not too patchy for your tastes

Haha, thanks James! You are giving such complete tools that I am now relunctantly connecting Max objects together…

I do think [fluid.plotter] reports mouse clicks faster that [mousestate] though… I had to invert the state of the mouse (==0) so that the mousedown event is actually triggering the samples…

Convenient but maybe dangerous? Something for us to ponder

I do think [fluid.plotter] reports mouse clicks faster that [mousestate] though… I had to invert the state of the mouse (==0) so that the mousedown event is actually triggering the samples…

Ill test on my end because this is a good reason to put the mouse behaviour directly into the JS.

There’s the [mousefilter] in Max but i think it’s made to only report on button-up event.

Sorry for the very long delay.

I just added an internal filter so that you only get output of coordinates while the mouse is down. This means that you won’t need to mousefilter on the outside to make it not trigger things as you release your mouse click.

Refactors various internal components such that state is only ever touched in on…e place at a time. Use `const` where data should be immutable. Change the precedence of colour assignments. This changes the behaviour (rather fixes it because it never worked): 1. Set a dictionary from `fluid.kmeans~` for example those clusters get those colours 2. Change some of the points with a custom colouring using `pointcolor` 3. Apply a new dictionary from another `fluid.kmeans~` The final stage will overwrite the custom colours now. Also fixes the help file.

Which means it will be in the nightly builds and soon Beta7 release.