I’ve been working on exploring using transducers on my snare (after seeing @alicee’s talk at the last plenary) and have gotten some pretty interesting results.

Angie filmed a performance video which will likely be streamed as part of The Noise Indoors mini-festival next week, and along with it I’ve filmed a little explanation of the setup and what’s going on.

edit:
Performance video is finally up:

Also using some fluid.spectralshape~ to handle descriptor-based ducking for the larger transducer.

The “big” one (Dayton DAEX58FP), before mounting it on the snare: 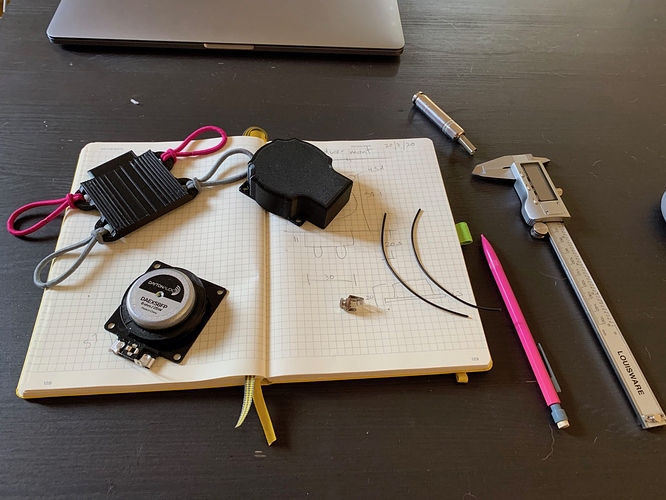 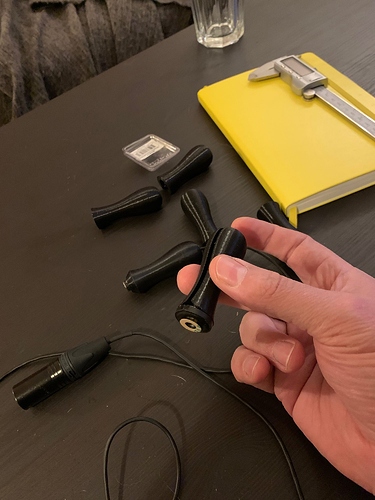 The performance video has more stuff going on, processing-wise, but the main FluCoMa bit is this: 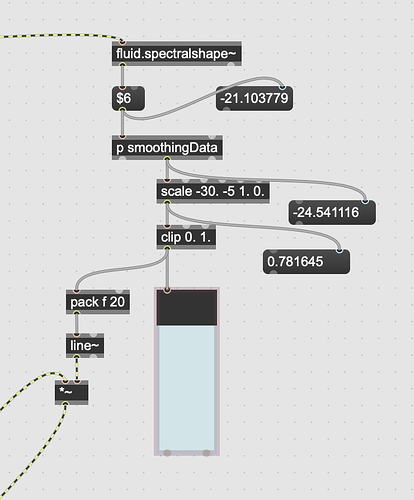 Basically using spectral flatness to duck the audio going to the (larger) transducer.

I also tried the ‘confidence’ out of fluid.pitch~ but I liked the way the overall curve and response worked with fluid.spectralshape~.

3 Likes
Short improv videos using some FluCoMa stuff
LTE - An alternative to LPT for people who don't care about "pitch"
tremblap April 2, 2020, 7:10am #2

This is great! So elegant, simple yet clever, and so potent!!! I look forward to hearing the performance. I presume you have a beautifully detailed blog post coming as usual?

One idea: do you have a smoothing curve control, to allow feedback to pop faster or slower depending on a controller, or more interesting to explore, the activity of the past [time window]? (or both: a ‘natural’ mode where it follows recent activity, and a jump button to allow quick changes like in your musical forms)

There probably won’t be a longish blog post until I do something with it, but perhaps I’ll make something explaining the idea and tech, sharing the files etc…

I’ve played with the curve a little bit (that ‘magic number’ scaling in the screenshot). I’ll probably also come up with some more response curves since the ducked version and full-volume versions respond differently, so having one that’s even more subtle, that never fully “kicks in”, but just nudges the feedback along.

I thought about incorporating both descriptors too (flatness and confidence) and seeing what comes of that.

Both transducers are aggressively bandpassed as well (well, low and highpassed) as otherwise they tend to create very high pitched feedback first (obviously). So I think both have a 2nd order lowpass around 1700Hz, and then a highpass to remove the rattle from the large transducer. I’m hoping that eventually goes away since I’m using a 3d-print and scrunchies to couple it to the drum, so the curve is not perfect, the material is hard, and the scrunchies are soft. I want the base plate to be made out of a hardwood (and CNCed), and then I need to figure out a more rugged way to couple it to the drum, with like adjustable bolts or something.

Thanks for the further details

Both transducers are aggressively bandpassed as well (well, low and highpassed) as otherwise they tend to create very high pitched feedback first (obviously).

2 other ideas: what about an adaptative filter like sooth where you would nudge slowly with a sort of pitch output (a kind of histogram approach, or something like @jamesbradbury’s spectral flatener)

or just a simple spectral tilter between you HP and LP, like the free tilt which is useful in modular synth sound design

Keep us posted, this looks amazing!

Both of these would be fantastic options.

I was actully trying to work out a dynamic filter thing (or rather, was asking @SirPeteDowling to help craft one) that would help discourage feedback spikes, but only subtly. Like a pitch tracker, envelope follower, compressor combo. That was when I was doing stuff that had high dirt and open mic, but I didn’t specifically want runaway feedback (also would have been great for the Kaizo Snare performance).

I also wanted to build a simple-ish “feedback eliminator” training patch, where I could bleed the room notes and press a button to notch out the nodes I have decided are no good (rather than manually creating those curves, which is time consuming, and a bit shit).

But the opposite would also be useful, kind of managing and encouraging feedback.

So definitely lots of filter exploration to go down. To create a vanilla-Max tilt-type thing, would that be something like a low and highshelf centered at the same frequency with opposite gains?

This sounds are great - I love watching the snare grow with more and more appendages. If you wanna take a look at some spectral compensation code and maybe improve it make it faster/realtimey lets do it!

Yeah, I’m curious about that.

Latency is super critical for feedback stuff (obviously) where a difference of 64samples has a massive impact in the response of the system.

The slowest bit of that concept was the melband analysis on a big buffer so there are definitely faster less weighty ways of implementing the same idea.

(after seeing @alicee’s talk at the last plenary)

which is now available here:

Dear all During the last project plenary, we had 6 other talks that we think are inspiring and definitely worth sharing. First on is @alicee with her amazing views on feedback system and life simulation metaphors and creative coding methods. I hope you enjoy as much as I did!

Performance video is finally up:

This is quite epic! What are the processes? Same as last gig, plus transducers? Plus some transposer… it reminds me of your code to emulate the 90s transpose pedal…

Not really. There’s a couple that are the same (Dirt and Cloud) but the rest are more of the revamped confetti modules: 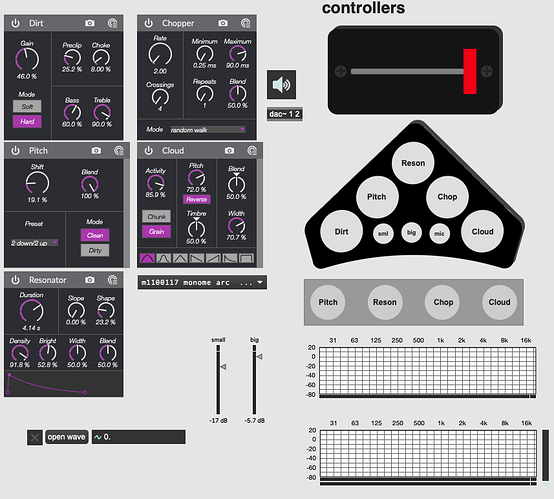 Most of the “sound” of the video is the Chopper and Pitch modules, with the Pitch one being a Whammy pedal emulation (now revamped using fluid.pitch~ instead of sigmund~).

Where are the very harsh, digital sounds coming from at https://youtu.be/ftc0lj3yr_Q?t=394 ?

I scan through my hard-drive for files, then I sonify them. After that I run some ML stuff to pull out interesting…

It’s the Chopper module with the settings from the screenshot above. Specifically when you stop sending it audio. It’s constantly recording tiny zero-crossings and plays back the current amount in a random walk, but if/when you send it silence, it holds onto what it had before, so you get this crunched up version of what’s been happening (in this case kind of scratchy snare sounds).

Hahah, you had me…

I’ll have to check it out in more detail

It’s actually a stock Max thing, or rather, a juiced up version of a stock Max gen example. It sounds badass though, particularly in this “starving it” kind of playing style.

Waaa, this is awesome Rod. Such beautiful nuances across the resonant nodes of the skin. I’m gonna have lots more Qs about your software set up once I’ve caught up, but one idea for hardware. You mention needing a better solution for coupling the big transducer to the snare - does your current 3D printed mount fit the curve nicely already? Otherwise polymorph might be your friend.

This polymorph material, is there a way to bake it permanently? I remember having loads of fun with food-grade silicone with the kids (and made amazing bass mutes with Lego tiles as mould with the left-overs) but this could open bass-preparation to another level!

Yeah, it’s been fun to experiment with. The stuff in the video is more superficial interactions too, which are amazing as they are, but will lead way to more stuff obviously.

The housings are printed in two parts, so the “lower” bit that touches the drum I’ve printed at the finest resolution (0.12mm layer height) so it matches the radius of the drum well. I’ve got a CNC machine now too, so my plan is, once I have a better way of mounting it to the drum and tweaked design, is to mill something out a hardwood that matches the curve of the drum more accurately. With (non cutting edge) 3d printing stuff, so you can’t really do ‘swoops’ into material without steps, but a CNC machine can do that no problem.

At the moment it’s “working”, but I really need to get a better way to attach it to the drum physically as this is a weak point of the design at the moment since at higher volume levels it will rattle against the drum (hard plastic isn’t ideal for that either).