From what I remember, most objects were given useful default parameters a while back (which is fantastic). It seems like these two, after the “breakup” have pretty absurd default params that do nothing.

They should be given some remotely useful params so they are in line with other objects.

Bit bombastic there. Can you be more specific about which ones are absurd? 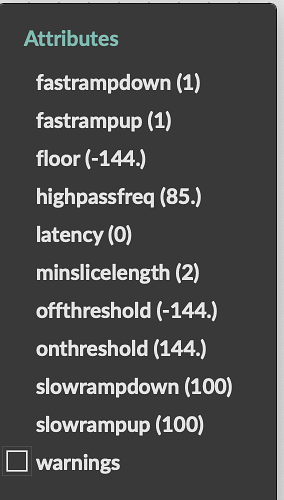 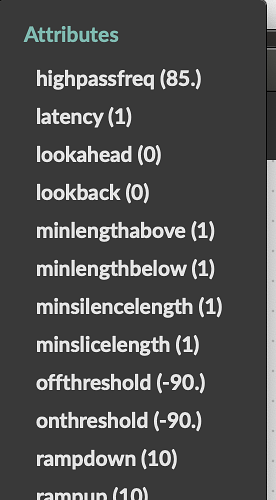 These are the defaults. I can’t imagine the signal that would trigger a slice with an on of 144dB and an off of -144dB for fluid.ampslice~. Same goes for a @minslicelength of 2 samples, etc… Basically all the 1sample long settings aren’t useful defaults, particularly when some other objects have units in bins and such, where tend to be around 1-10.

For most of the objects, just sending some audio in gets you something going. Both of these require a bunch of stuff, and often orders of magnitude away. (something like the “musical example” settings from each would be a good jumping off point I think)

Agree that there should be a strong chance of getting slices with a normal-ish signal (for a given value of normalish). I assume the defaults were selected on the basis of a particular workflow of gradually lowering a threshold, and then having something really ticklish, but I’ll confer with my other two stooges and see what the lay of the land is. (Personally, I crave a bit more uniformity betwen thresholds for slicing algos, but this is hard to acheive in practice; and, as you’ve mentioned in the past, it’s tricky when you can’t see the control signal you’re slicing against. These Thing Are On Our Minds Rest Assured)

In just playing with these (in Reaper actually, where it’s faffier to iterate over settings) it just struck me that there was no way I was going to get any results from the default settings. And the fact that settings are orders of magnitude away from useful settings (all the 1sample long defaults) actually further confuses things because on first blush it seems like those parameters are in bins, or standard deviations, or some other unit than samples.

Either way, there should be some consistency across the board in how defaults are set. I just hope it falls on the side of “immediately useful defaults”.

The danger with this is that there is no such thing as typical signal… and for the plugin worlds, the main difference between pro and amateur plugs is that the former start as empty/neutral as possible… but indeed at least window sizes in line with the rest of the toolbox - but then you’ll moan that they are too slow!

Sure, but a reasonable ballpark (not 144dB/-144dB with 1sample long parameters) is a good place to start. I think there’s no signal in the universe that would trigger these objects with default settings.

Particularly with there are so many units involved, I often look to see at the general range to deduce whether it’s samples, bins, or dB that I’m looking at (since attrui and @attributes don’t communicate that one way or another).

I think there’s no signal in the universe that would trigger these objects with default settings.

that was the whole point. True negatives, not false positive. But I’ll have a discussion with the master of interface design and he should have a more principled answer…

I don’t see the usefulness of instantiating an object that will do nothing under any circumstance.

I could be wrong, but I remember there being a shift after the 2nd plenary, where based on feedback from a bunch of people, that things would have “useful defaults”. This is more-or-less the case across all the objects. All the descriptors one do something reasonable, novelty slicing works be default, hpss/nmf, etc…

These two stand out as being different.